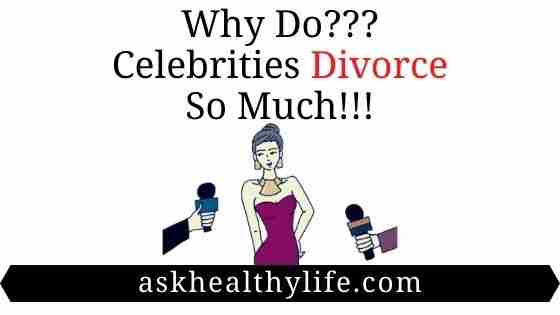 “Why am I staying away from social media or other public gatherings??

I think it’s time to answer. Actually, I have been in separation from my husband for the last two months. We have already filed our divorce application. I was a little bit disturbed about it. So, I decided to take a short break. Hope, you all have got my point.”

Why Do Celebrities Divorce So Much?

Liza became very much disappointed at that. She started to wonder why do celebrities divorce so much or break up so quickly despite having such a glamorous life.  However, we have listed down the reasons for that in the following discussion. Let’s have a glance over these.

The Reasons Why Celebrities Divorce So Much

Go over the shocking reasons for celebrities’ divorces or breakups, given below.

Let’s think of divorce from the perspective of a common man or woman.

A low or mid earning man who has to lead the family on his sole income may not generally want to conclude his toxic marriage because he has limited earnings to fight the case and pay the alimony (if he loses). Again, for a homemaker or a low-income woman, marriage works as a support. So, ending it means losing the support as well. Besides, she may require to fight a case for alimony, which is also costly for her.

But for celebrities, this is not a very big deal. They have plenty of money. So, they can easily bear the expenses of a divorce and later move on with someone else.  However, you will notice the practice of prenuptial among Hollywood actors where they define how the assets will be allocated in the case of divorce.

In this ever-changing world, stress has become an integral part of our life. Excessive stress can spoil our day-to-day activities and favorite relationships. When this stress relates to the workplace, things get even worse.

Just think you are badly stressed with your office projects. But your partner doesn’t understand your problems and always pushes you for silly reasons. What would you feel at that time?  Won’t you feel like getting out of this stressful life?

The same thing happens to celebrities most often. Though we find our stars living glamorous lives, this is not the actual picture. Back to this glamour, they have lots of responsibilities and work pressures. So, when they find their marriage increasing the stress, they feel free to get out of this and move on with someone else.

If you observe the celebrities very closely, you will notice that they are very much career-oriented. They only believe in success and popularity. So, they work hard to stand in the first position in their field and keep up the pace of progress. Even any celebrity hardly steps back from career to help his or her loved one move forward.

Due to this instinct, they maintain more attachment with their profession than any close relationship. Again, they attend event after event and stay available for the media to hold down the relevance. These things prevent them from spending quality time with their spouses. For that reason, they are sometimes found in conflicts that at last end in legal separation.

(4) Having Lots of Options

Celebrities have lots of options in their life. Some want to stay with them just because of their countless wealth and worldwide reputation. Again, some admirers genuinely cherish them. As a result, whenever celebrities find their marriage life creating troubles, they prefer getting out of it ASAP.

They have no fear of staying alone for the rest of their life. Because they know there is always someone who wants them. It is also a motivation behind the alarming rate of divorce among celebrities. Again, stars often fall in love with co-workers or other celebs that also excites the divorce rate.

Celebrities are more vulnerable to temptations because of their professions. You can think of a dancer who has a great chance to be intimate while dancing. Again, actors or actresses need to come closer to the co-stars, both emotionally and physically, to meet the story’s requirements. This type of intimacy often creates some weakness that can lead to illicit relationships.

Essentially, if that celeb is not happy with his marriage or feeling a lack of excitement in the couplehood, this closeness can push to divorce his wife and search for new excitement, mainly s*xu@l ones. However, this is very easy for celebrities as they have lots of admirers.

The growth of couplehood depends on joint efforts. When one refuses to make one’s efforts, the relationship becomes very much vulnerable. So, the couples should set their desires thoughtfully.

Celebrities always stay in the center of the spotlight. People scream seeing them; the media run after them. For this, they feel more special and powerful than others. When they get wedded, they think their spouses will also keep them at the center of their attention. But that doesn’t happen in real life.

As a result, they get into conflicts and don’t try to resolve these because of their so-called egoism. At last, the relationship turns into divorce.

You just went through the possible reasons why celebrities divorce so much.  These things are quite crucial for non-celebrities to consider.

We ordinary people often feel that money and fame can bring all happiness. If we earn so much money,  we will be able to lead a satisfying life. Celebrities’ lives are a burning example of that. So, we should make efforts to build up healthy connections with loved ones.

We have to grow the following qualities: